How to build your own Arduino

Arduinos are a great tool for learning electronics, so why not take it one step further and build your own Arduino based board.

The above list is the bare minimum, you may also wish to add: 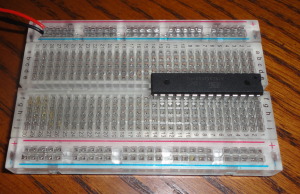 Before going any further I will add a copy of the ATMEGA pinout also showing the associated Arduino pins as they do differ. 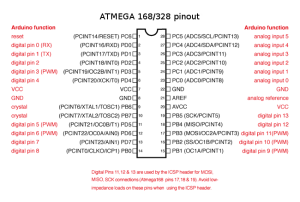 You should now have something that looks a little like this: 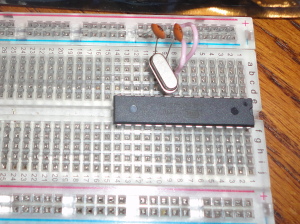 With the method used in this tutorial (at present) an Arduino board is required to act as an ISP (In-System Programmer) in order to program the ATMEGA chip. 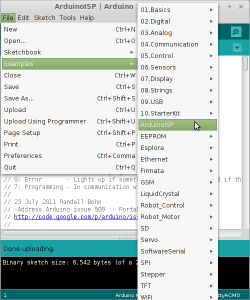 The ArduinoISP sketch allows you to use an existing Arduino to program an external chip, upload the sketch to your Arduino by clicking the ‘Upload’ button or [File -> Upload] 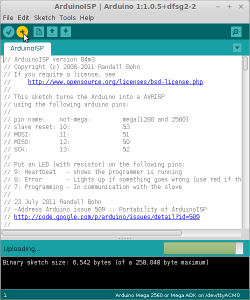 The upload will take a short moment to complete, once done your existing Arduino is ready to be wired up to the ATMEGA chip for programming.

Connecting the Arduino to the ATMEGA

In order to program the ATMEGA chip from the Arduino 6 wires will be used to link them together including +ve and ground, a 100uF capacitor will also be used to prevent your Arduino from resetting.

Finally add the 100uF capacitor between the Arduinos 5V and Reset pins, the pin on the side with the silver strip should be inserted into the reset pin.

If you’re using an Arduino (or Funduino in my case) Mega2560 your setup should look like the following image, if you are using a different Arduino board it will look a little different: 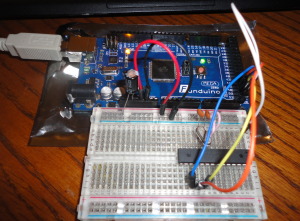 Now that the ATMEGA is connected to the Arduino board it is time to burn the bootloader to the ATMEGA chip. 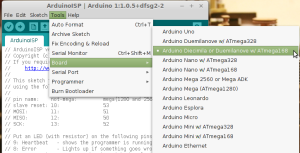 After selecting the board appropriate for your ATMEGA chip ensure that the 2 boards are correctly wired together and that the 100uF capacitor is in place.

To burn the bootloader to the ATMEGA chip select [Tools -> Burn Bootloader], this process should take no longer than a minute. If you receive an error while burning the bootloader double check all the wiring, I also found that unplugging the USB cable from the computer to Arduino and re-connecting it solved the burn issue. 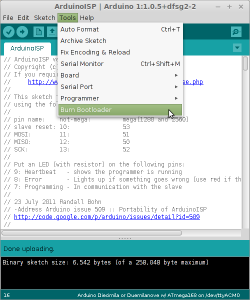 Now that the bootloader has been burnt to the ATMEGA chip, you effectively have a very basic Arduino clone.

Uploading sketches to the ATMEGA

When uploading sketches to the ATMEGA chip you will need to connect the chip up to your Arduino as described above, making sure the 100uF capacitor is in place. The Arduino board will also need to have the ArduinoISP sketch uploaded to it.

As uploading sketches is a very broad subject with the infinite possible programs I will use the LED Blink sketch as bundled with the Arduino software. 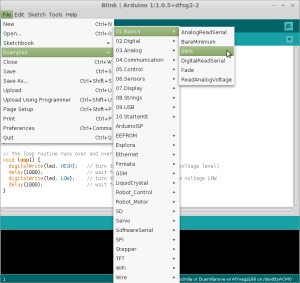 As mentioned at the top of the Blink sketch ‘Pin 13 has an LED connected on most Arduino boards.’, although our ATMEGA chip doesn’t have an LED attached yet, remember that pin 13 is referring to the Arduino pin, not the ATMEGA pin.

Connect an LED from (ATMEGA) pin 19 to a blank strip on the breadboard, then an 220Ω resister from the LED to ground.

To upload the sketch to the ATMEGA chip ensure again that the correct board is selected under [Tools -> Board], instead of clicking the upload button select [File -> Upload Using Programmer]

Once the sketch has been uploaded the wires connecting the ATMEGA chip to the Arduino may be removed and a 5 volt external power supply added.

Now you have a very basic Arduino clone the possibilities are endless, have fun and enjoy what you have learnt.

I intend to continue this tutorial with a follow-up showing how to create a USB to serial adapter allowing you to connect the ATMEGA chip directly to your computer via USB without the need for another Arduino. Hopefully the parts will arrive soon.