One of my favourite commercially available film cameras has to be the Minolta X-300, so much so that when my much used X-300 finally gave up on life in 2014 I had to purchase another on ebay as soon as possible. 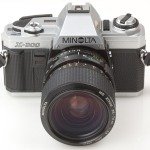 The Minolta X-300 is a manual focus metal bodies SLR released and sold during the 1980s featuring two shooting modes, full manual or aperture priority (by selecting ‘auto’ from the shutter speeds).
Features:
The camera features a simple yet effective light meter with a visible LED reading on the left side of the viewfinder. In auto mode the light meter displays the shutter speed dependent on the aperture set on the lens. While using the camera in full manual what is considered the correct shutter speed for the set aperture is permanently illuminated with the manually set shutter speed blinking, this is ideal as it gives a good representation to the level of over or under exposure allowing you get the required exposure with ease while also learning to meter by sight.
Power:
The Minolta X-300 requires 2x LR44 button batteries in order to operate, the camera will not operate at all without power.
Controls:
Being a primitive camera by today’s standards there are very few controls to learn with the Minolta X-300.
Lenses:
The Minolta X-300 accepts lenses using the SR bayonet system, many also refer to this as ‘Minolta MC’ or ‘Minolta MD’ which can be confusing when purchasing lenses as the terms ‘MC’ and ‘MD’ appear on many non SR lenses. Tamron also produced a Minolta SR mount for their Adaptall and Adaptall II lens ranges.
At the time of writing (2014) I find that superb quality lenses can be purchased for exceptionally low prices, with my recent purchase of a replacement Minolta X-300 body came a Tamron Adaptall  35-70 macro all for the reasonable price of £12 including shipping. I have also purchased a few lenses in the past for this system in the under £20 price bracket which have worked and served me very well.
The so called ‘kit lens’ that came with many Minolta X-300’s new and second hand was the MD 50mm 1:1.7. Don’t be fooled by the term ‘kit lens’ as unlike with today’s SLR’s the MD 50mm 1:1.7 lens is a very capable and well built piece of optics, allowing focusing from 18 inches to infinity and with aperture settings ranging from f1.7 to f22 in 1/2 stop increments (except for f1.7 to f2.8 which is done in one step), the MD 50mm 1:1.7 also features an evenly distributed 6 blade aperture system superior to the 5 blade systems commonly found on kit lenses of today, this gives a slightly shaped bokeh which is at least evenly spaced.
Inlcuded in my Minolta X-300 bag are the following lenses:
Minolta MD 50mm 1:1.7
Minolta MD Zoom 28-86mm 1:3.5-4.5 allowing macro of 1:4 at 28mm
Tamron 35-70mm 1:3.5 CF Macro (Adaptall) allowing macro of 1:2.8 throughout the zoom range
Hanimex MC Auto Zoom 75-300mm 1:5.6 allowing macro of 1:3 throughout the zoom range
Flash:
The Minolta X-300 does not include a built in flash although does have a 2-pin hotshoe allowing the use of basic TTL flash units, although sync speed only goes as far as 1/60th of a second which is a little on the slow side, but easily usable.
Included in my Minolta X-300 bag is the lower end Minolta Auto 118X flash unit which is a compact yet failry powerful flash unit allowing the use of the Minolta X-300 TTL system. The Minolta Auto 118X requires 2x AA batteries to operate.
Accessories:
Many accessories are available for the Minolta X-300 camera, included in my Minolta X-300 bag is a Jessops M-1TR Power Winder allowing for automatic film advance after each exposure. The M-1TR Power Winder allows for single shot advance, continuous shot advance, an auto timer (5sec, 30sec, 1min, 5min) as well as the use of an electronic remote shutter release.
Conclusion:
As already mentioned the Minolta X-300 is one of my favourite 35mm SLR’s, although more likely my favourite camera of all. I have often stated that if I was given the ultimatum to sell all but one camera (god forbid) the Minolta X-300 would be the one I keep, even over my dSLR’s.
Minolta X-300 User Manual (PDF 3.3MB)